The Jungle Diaries: The Meaning of Life

It was all so new and exciting and completely outside the reach of the mainstream media , which meant that it all felt like a big, wonderful, magic movement, a shared secret which would change everyone’s lives and the entire world. I wanted EVERYONE to know about this magic thing!

(But once the media started catching on, they were doing it all wrong, of course. Experiencing this first hand led me to dive deep into the studies of subcultural theories at university a few years later. An extremely interesting field which I will return to later on in JUngLEkalenderen.)

The Endless Enthusiasm
First, let’s have an unfiltered look at what it feels like to be (and become) a very dedicated jungle raver. We’re diving back into my Jungle Diaries, and we’re starting out with a description of a rave I went to in the legendary Lazerdrome in South London in 1994. 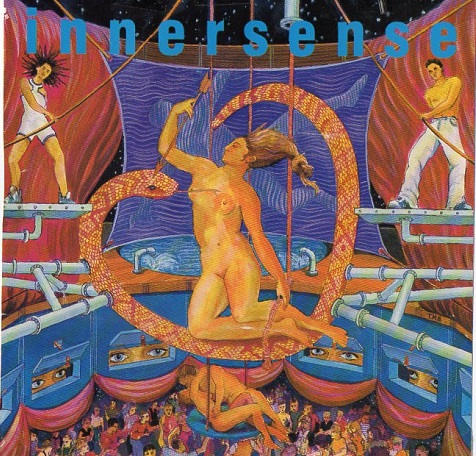 This is a flyer from the Innersense parties  that were on on Fridays at the Lazerdrome at the time.

And here’s what I wrote about THAT night:

“The Lazerdrome. The queue stretches all the way down the long stairs and out into the street. After the wait everyone’s pockets and bodies are searched quite thoroughly by the security people. There are metal detectors, too. And finally we step into the spacious chillout room where someone’s playing garage. There’s no real end or beginning to the dancefloor. Lights are flashing and fanning out. There are a lot of arcade games by the walls. A bar with colourful fruit drinks, water and lollypops. 10 tv screens in the ceiling showing odd films and static and colours. There are big glow-in-the-dark backdrops on the walls, with symbols of all the star signs.

We are walking through that room and to the left and turn left again into a smaller, half-secluded space. And another one. Or is it the same? They’re strangely connected. Confusing on purpose. We reach the labyrinth with zigzag patterns and mirrors. Twisting and turning in the darkness. The sound is changing, we’re almost there. We step out into the mainroom. Hardcore jungle techno. It’s darker in here, much more packed and energetic, with flashing lights, and the hypnotising, spell-binding lasers.

Everyone’s dancing or running up all the stairs and ramps which constitute a confusing labyrinth of pathways to the bridge above the mainfloor. Everywhere we look: people dancing, water bottles, lollypops, Ribena cartons, smiles, crazy conversations, waving, colours. It’s a playground, it’s paradise, there’s always something to look at and fall into, it’s impossible to be bored.”

Cut to little bit later that year, after my move to Copenhagen:
Every weekend in London we went to parties like the one described above,

and that’s why I keep writing about how much I miss London in my Copenhagen diaries:

“I know I’m dead lucky to have met some junglists here, finally… but I still miss the way it is in London. So full on, so perfect, so big. I don’t know how I managed to leave. I can’t wait for New Year’s. Jungle for a week, all week, every second. You sort of forget how much fun it really is, and how intense, and thank god for that. To function in day to day life I think one’s mind puts up a block of some sort so that you want to live in between the raves as well.”

I’m not the only 20-year old raver who felt that she found the meaning of life and the fun-fuelled pathways to a better world on the dancefloors of the 90s rave scene, I know that. So let’s just dive straight into my Endlessly Enthusiastic 1994 diary rant about just HOW amazing and important I think this music (and the culture surrounding it) is:

“This music is pure magic, it’s so tribal, so deep. I remember one morning after a rave at The Paradise, where Ben & I were at Gary’s and Gary said that he honestly thought that every 5th thought he had (at least) was about jungle. I feel the same. It’s there all the time. 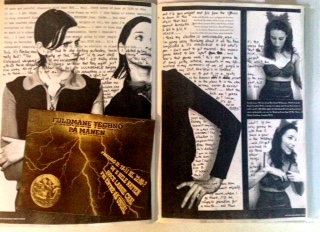 I know I’ve been over this a billion times but nothing is better than being at a jungle rave. Things here in Copenhagen are good, it’s all so exciting – it’s new people and new experiences all the time and student life is the best. But raving in London made SO MUCH SENSE, it felt SO RIGHT, as if we were experiencing life the way it should be experienced… as if we had found the secret, the meaning of everything.

Just think of way way back, at the beginning of civilization, when tribes of people lived in the jungle… and the most important thing, the magic that ruled everything were those nights of rituals, those nights when they would gather up and paint their bodies and eat their holy, magic plants and dance around to the beat of the drums of the medicine man in a wonderful and necessary state of shared ecstasy and trance and hallucination and visions in clouds of smoke and fire and deep understanding of life and connection with eachothers minds and nature and the universe. SAME THING! They were junglists!”

Yup, I’m going all in here. Just to clarify, I’m not dismissing this as the silly, feverish rants of my fun-loving 20-year-old self, although I can safely say that I was a bit more intense about my insights back then. As you are at that age. 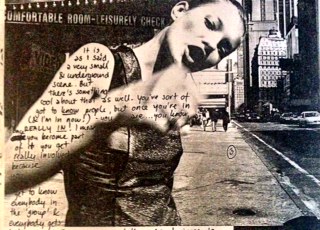 But I wouldn’t have stayed so intensely connected with the subcultures surrounding high quality electronic music throughout my entire professional career and in my personal life as well if it wasn’t because I still believe that SUPER IMPORTANT STUFF happens on the dancefloors. Not every single dancefloor, obviously, but the right ones. Proper dancing is not just about having fun, it’s about meditating and reconnecting with the cosmos.

For more reading on this subject, I highly recommend that you read what the Swedish trance duo Son Kite had to say on the subject when I interviewed them last year: “Dancing is a very important ritual”.

This is amongst the things they say:

“Many people have lost their connection to why we are here and what we are doing here as human beings. Hunting for money, fame and achievements is what we learn in school, and it’s very easy to just get lost in this hunt without even being aware of why we are not happy doing it. That’s why it’s so important to get into the dance ritual and let the the stress out”.

“This ritual is built into our DNA. We are supposed to do it, and we have always done it. Something important happens when we dance to hypnotic drum patterns for several hours. It gives us energy and fuels us with creative ideas. It’s healing, like yoga and meditation. It’s so important that we know this and don’t forget our roots”, Marcus says.

“Dancing for eight hours and really uniting with the music is a reminder that this is how it could be with everything you do in life. It’s such a wonderful feeling to be one with what you’re doing, to really melt into the experience. That’s why it’s so extremely important for us to inspire people to reach that feeling. It’s a tool to really connect to life. The sound of our music is formed by this aim”, Sebastian says.

In both meanings of the word.

Hungry for pictures?
If you want to see all this theory in action, check out all the pics in the How to be a Junglist: The Dancefloor Moves from last year.

If you want to read more about the magnificent sonic puzzles of proper jungle tunes and how they can send you into a meditation-like state, jump right back to How to be a Junglist: Going to London.

If you want more Son Kite, you can read my Weekendavisen interview about their album release last year here (in Danish): The illusion of the big machine.

See you tomorrow, for the first REAL unwrapping-of-presents in JUngLEkalenderen 2015. <– go here for the complete collection of #JUngLEkalenderen, both past and present.

← Blasts from the Past: The 4Ward Show
Present Time: All Jungle →