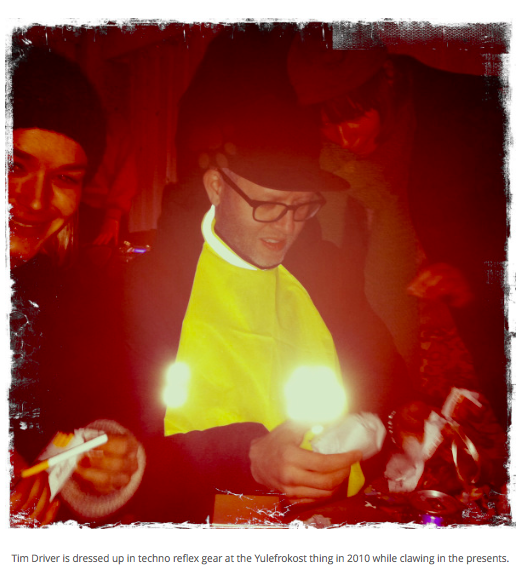 Diving deeper into the dark arts of number magic, today is dedicated to the confessions of Tim Driver – who really, really, REALLY likes the number 5. And JUngLEkalenderen likes Tim Driver, so here we are.

Tim is the co-founder of the magnificent OHOI! collective and managing director at Bas Under Buen – which might look like just another socially involved series of parties to you, but it’s really a company testing out if our motorways and cities and stadiums are built solidly enough by playing really deep bass lines at dangerously high volumes under passageways and bridges and anything else made out of concrete.

This is what a Bas Under Buen in Copenhagen looks like:

And this is what Tim looks like, hard at work at Bas Under Buen in Århus, testing out the stability of some concrete construction using basslines to reveal the cracks in the system. 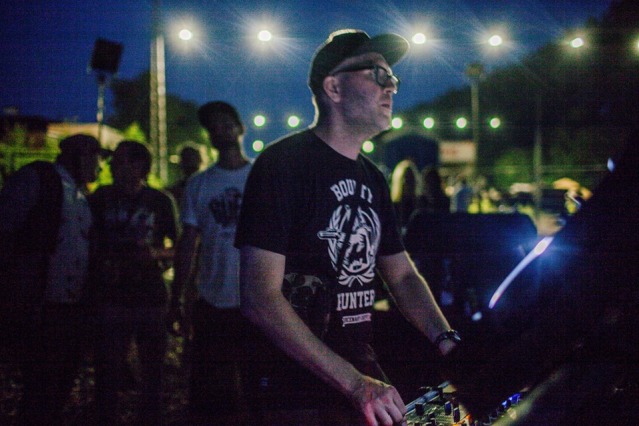 So, Tim, what’s up with you and the number 5?
My favourite number has always been 5. And I just have this OCD thing going on with 5s and 10s and zeroes and 100. I like it when things add up. If I look at my watch at :58, it kind of has to swith to :00 before I can look away again. Yeah, that’s a little bit weird. But it’s always been like that.

I feel a certain kind of satisfaction if I play a dj-set and I realize afterwards that I have played exactly 25 tracks, or 30. I don’t think about it during the set, though – but if it adds up to 25 when I make the tracklist, it just feels good. It’s not something that bothers me in my day to day life. I just like order and square angles and the number 5.

Tim Driver is not bothered by stepping on the cracks between the tiles on the garden terrace AT ALL.

When did you become a junglist?
The first jungle party I attended was Nis’ legendary party at Rugbyklubben on Christianshavn in 1994.

That was my first jungle party in Copenhagen, too. 🙂
Back then there weren’t that many parties to choose from. It was nothing like today. A month could easily pass between one techno party and the next. So when a techno rave was on, everyone showed up. It didn’t matter if it was techno or house or jungle or goa trance or whatever it was. It was just ”Let’s go!” no matter what. For me, it all started out with techno. I went to my first techno party in 89. And I went to my first Baby Club (Kenneth Bager’s club night) in 1990. I was 16 year’s old at the time. Rave culture hardly existed in Denmark back then.

(If you want to go back to that very first jungle party we’re talking about – Jungle Fever II – you can read Chriszka the Time Traveller’s description of that very party in her diary here: The Jungle Diaries: Longing for the Tribe). This pic is not from back when  rave culture didn’t exist, but it’s from back when we didn’t have cameras in our phones so that people like jonask.dk were the only ones taking pictures at parties.

Why do you love jungle?
It’s the energy. And I have always been fascinated with different drum patters. Which is quite strange, really, because I grew up with techno and 4/4. But I always liked a breakbeat. Maybe because I also liked hiphop.

How does raving make the world better?
I was standing at the Outlook Festival thinking… okay, the world is fucked in many ways. Some people out there actually think that a suicidal death cult like Isis is awesome. Jeeez, they have just missed the point of life completely! I’m absolutely certain that if they were here right now, at the Outlook Festival, they would be able to see… … …They’ve just completely misunderstood everything. It’s just tragic that some people choose a path so destructive when they could have chosen to do something as awesome as raving instead.

I don’t rave as much as I used to, but I know how intense it is to just surrender to the music and dance for hours. That’s another way of canalizing your mental energies. And some people choose to use that energy on something destructive instead.

But my spirits are lifted when I’m at festivals, seeing so many happy people really enjoying themselves and the music. It’s important to remember that there are more people present at the Outlook festival alone than there are people doing terrorism in the entire world. We still outnumber you! You will not win!

Tim Driver and Chriszka the Time Traveller enjoys being on the winning team at Roskilde Festival 2006.

What’s your favourite tune?
I don’t have an all time favourite, but ‘Brown Paper Bag’ by Roni Size made a big impression on me. Maybe it was the way it marked the transition from jungle to drum’n’bass, signaling a shift to something new. But there are so many tunes. ‘Incredible’ is a fantastic jungle tune, too.

What’s the best thing that happened this year?
I just spent a three week vacation in California which was really really nice, and I would like to be back there RIGHT NOW, lying on a beach in San Diego. Especially with this cold weather. It was a much needed vacation – my first one in a year.

What’s your best party moment ever?
Okay, we’re going back to the 90s. It was the first time I was at Mayday in Berlin in Die Halle, this huge old train depot with room for 6- or 8000 people or something. When we entered the hall we were just like ”whaaaaaaaaaaat?!”

There was a whole bunch of us who had driven to Berlin by bus. It was all arranged by Pelle and Maximum Magazine. We partied all night at the Mayday rave and in the morning we went on to an afterparty club somewhere in Berlin where Laurent Garnier was playing. We stayed there until the afternoon and then we jumped back on the bus to drive back to Copenhagen. It was all so totally awesome, and people were still so hyped from the experience that everyone just wanted to keep raving, even when we were back on the ferry between Gedser and Rosstock. So we found a corner on the ferry and covered the lamps up with paper to dim the lights a bit and got a bit of a raver vibe going. No sleep, and no drugs. Just water and raver happiness. That was my first big raver experience.

Whohoooo! Massively awesome scanned photo of youngster babyface Tim in the raver bus going to Mayday. Appreciate this, you pixel sucking vampires, photos from that time are SUPER RARE!

My first dubstep party at Plastic People in London was completely mindblowing, too. It actually made me feel like I felt when I was at my very first rave. Experiencing a completely new music genre like that… And in such a different setting. It was such a small, dark room. And people were so intense. It’s pretty incredible that I got to experience that kind of feeling twice. The feeling of being at your first rave. And this happened in 2006! I thought I had heard everything. I hadn’t. 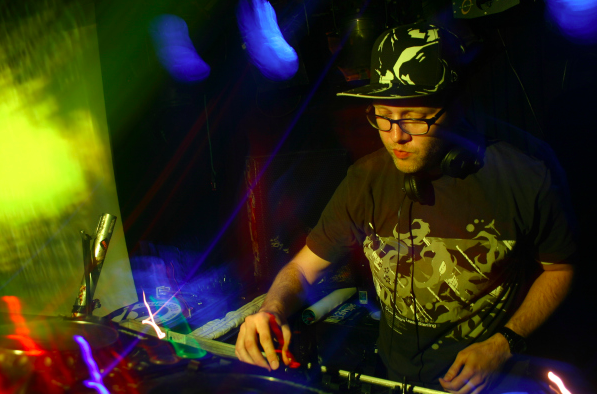 What’s the dark secret that no-one knows about you?
When I was younger, I was a big fan of Phil Collins. I still am, actually. I have all his old albums. I was a young kid, and I liked the grandiose sound of the synthezisers. And I thought he was cool. He played the drums and sang, which was a bit of an odd mix. And I’ve always been a sucker for a good melody of the melancholic kind. But I lost interest in Phil Collins when I really got into electronic music. I have all the old albums from the 80s right here on vinyl, though. Maybe I should give them a spin.

Do you want more Tim? Don’t miss out when Tim Driver and the crew returns with the good ol’ brain shattering Christmas tradition: JuleBass! – the craziest of all Christmas parties: (Here’s the facebook event). New location this year, same amount of bass, same old zombifying brew of glügg (rum’ified gløgg we assume) in the casserole. December 17th.

Or go back that party in Rugbyklubben – Jungle Fever II – here: The Jungle Diaries: Longing for the Tribe.

Did you miss a day of JUngLE? Go to JUngLEkalenderen for every post and all seasons.

← Jungle Confessions: “It’s against all odds, and it’s fabulous”
Blasts from the Past: Pirate Party Pack →