It’s the shortest and darkest day of the year here in Scandinavia, and I’m in serious need of some warm colours and light. So today, I’m taking JUngLEkalenderen to a warmer and brighter place. It’s excursion time!

We’re going on a trip to the most colourful week of the past year: The magical and magnificent Ozora Festival in Hungary.

YES, JUNGLISTS! I’m going ALL IN ON TRANCE today. I think you sensed that it was just a matter of time. With my alien reflex t-shirt and all. I’m a trancer, and you know it.

This is, of course, not just to annoy your subcultural sensibilities. As I have said many times before, junglists and trancers have a lot in common. Mainly, that their favourite music is fast and requires a lot of stamina on the dancefloor. And that they dance with a great deal more abandon than ….well, most other people.

But there are also differences. Trancers have a preference for outdoor parties, preferably somewhere secret and sacred and spiritual, all at once. Junglists are indoorsy urban types, and most of the natural imagery in THAT subculture exists on the flyers. On the party locations, not so much. The greenest thing in the room is usually the laser.

On the deco side of things, junglists could learn a lot from the trancers. And so, that’s where we are going on our excursion today. It’s not just a winter solstice escape, it’s INSPIRATION.

Okay, here we go, folks: 10 ways to recognise a trancer

How to recognise a trancer, #1: One thing that trancers have in common with junglists is that they take the music and the dancing very, very very VERY seriously. Wonderfully seriously! It’s not just for fun. At a trance party, the dancing is totally a spiritual and tribal thing. Nothing less. In the early days of jungle, the tribal vibe was heavy, too. One of my favourite weekly jungle nights in London around ’93-’94 was called Tribal Dance.

…and Tribal Dance took place at an absolutely legendary club called The Paradise in Islington. Which, on the surface of things, has absolutely nothing to do with this entrance portal to Ozora… But then again – MAYBE IT DOES!? You know how it is with portals. The lines between things blur! (And yes, here we go again: The Purgatorium theme is back).

How to recognise a trancer, part #2: They love to look at moving objects in fascinating patterns and interesting colours. 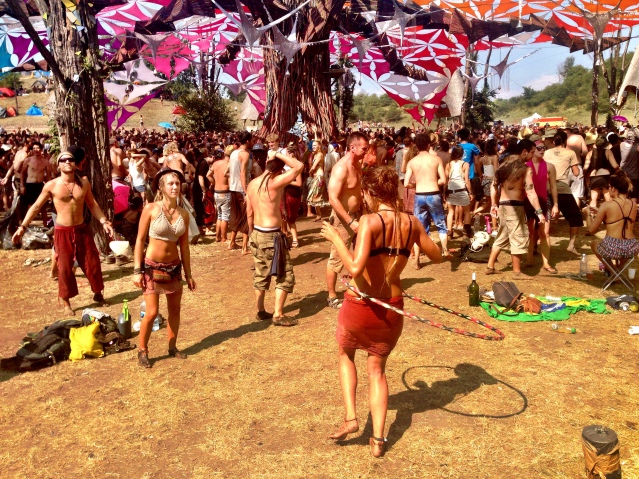 How to recognise a trancer, part #4: PLAYFULNESS. Trancers are really, really good with hula hoops and juggling balls and fireworks and any kind of colourful and glittering toy, really. And not afraid to show it. 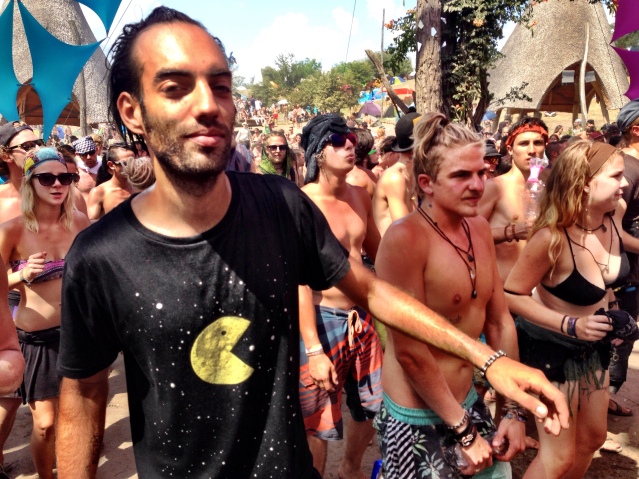 And just like junglists, they played a lot of Pac-Man when they were kids. Would this t-shirt be a prime example for How to be a Junglist: The T-shirt Special or what! See what I mean? Junglist and trancers are SO alike. ❤

Here’s another Typically Trance Playfulness Display: A carousel for grown-ups by the main floor. But of course. This also works as an invocation of the Gods of Wind and Air. Which is nice, when the temperature rises to 36 degrees every day.

The thing is, trancers are so playful, they can’t stop themselves. So on the festival site, the Ozorians have built an entire human-size labyrinth in a cornfield just to maximise the fun. 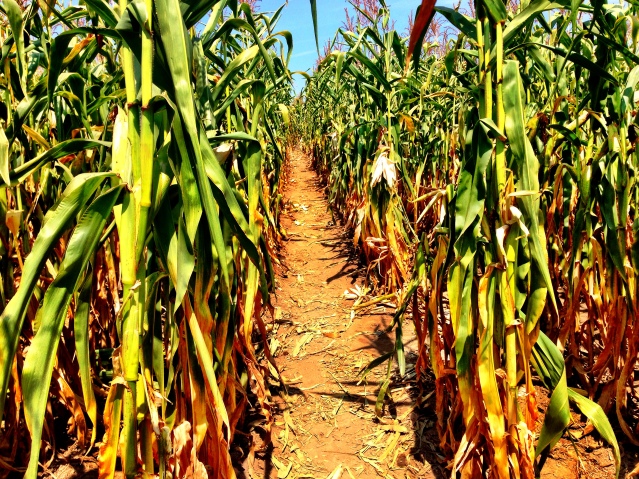 And so, you can embark on a new, strange adventure and get totally lost, far away from the dance floor and everyone. And yes, the labyrinth has creatures. 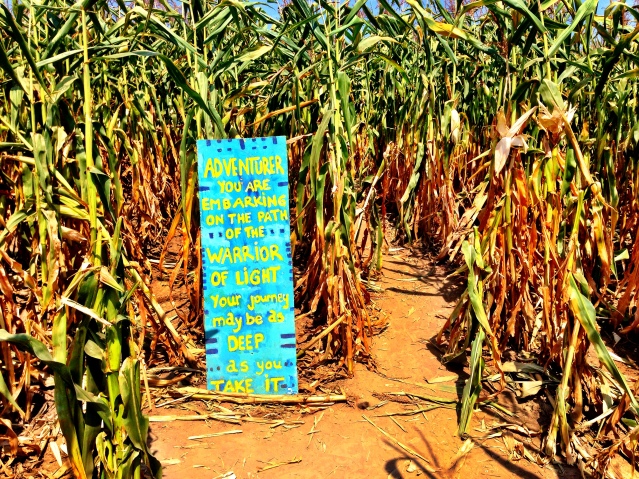 “ADVENTURER! You are embarking on the path of the warrior of light. Your journey may be as deep as you take it”. Man, I love it.

How to recognize a trancer, part #5: They know how to build main floors of EPIC proportions. Because, as you read in #1, dancing is a very, very important ritual to a trancer, and so, the environment has to live up to that.

So, at Ozora (for instance), the main floor is centered by this massive, Eden-like tree of Avatar proportions. From above, it looks like a colourful fractal, of course. At night, it morphs into a different shape, magically, like a giant space alien octopus creature, glowing in deep sea blue and purple colours. So beautiful, I couldn’t catch it in any photo. 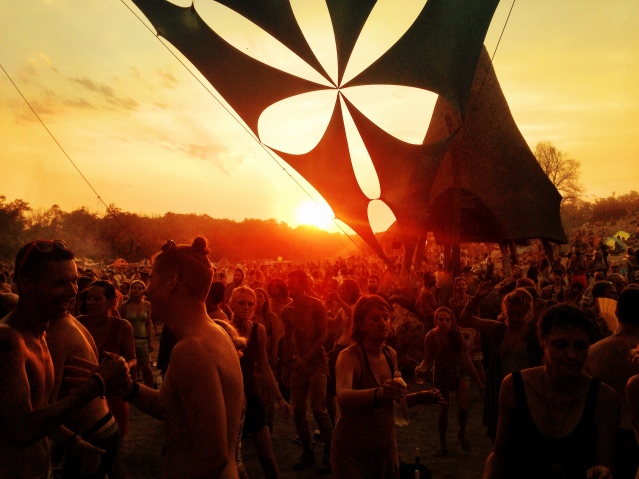 …because my camera only functions when the sun is shining, so this pic is as late as it gets in my photo selection. Oh, the Ozora sunsets.

Which leads me to: How to recognize a trancer, part #6: Trancers are the BEST with deco. Seriously, the best! Often intertwined with nature in the most magnificent ways. Here, again, the mainfloor, seen from the stage.

But the DECO MASTERY doesn’t stop at the mainfloor for the trancers. It’s EVERYWHERE. This fella was my First Favourite Thing at Ozora, spotted on the evening I arrived. He is a huuuuge creature made out of wood. A brooding Adam, lost in deep thought by the tree. I’m standing below him here, obviously. At night, hidden lights illuminated him, making him look unbelievably alive.

But lo and behold! Of course Adam is not alone. Here’s an even bigger Eve, hidden amongst the trees, with that tempting apple of knowledge in her massive hand. I didn’t notice her until on the second or third day. What a SUPERB deco. It’s Adam’s arm on the left, just to give you a sense of the proportions. (Is that the Purgatorium theme knocking again?)

How to recognize a trancer, part #7: They’re offline. Yeah yeah, I know you might think that I’m romantizising things now, but no, seriously, trance festivals are probably the Most Offline Places on Planet Earth now. The only reason my phone was out of the pocket at all – all week – was to take photos. Offline bliss for everyone. No time for digital distractions. So, what do you do instead? (apart from all the fun you’ve seen in the previous photos, of course). Well: the trancers turn to the old art of HANDWRITING. What you see here is a spot quite close to my romantic heart: The Wall of Hope.

This is where trancers look for their lost contact juggling balls and lost hoodies and lifts to other trance festivals. But much more importantly, it’s also the place where trancers leave long hopeful letters hoping to find the soulmate they met yesterday night up in front of the left speaker and connected with on an unbelievable spiritual level for seven incredible, magical hours and just HAVE to meet again, because that’s what you HAVE to do when you meet your soulmate, but it’s just that they don’t remember his/her name, but maybe a nationality, and will wait in the same spot every night for the rest of the festival. Oh, how I LOVE the letters on the Wall of Hope (that’s what I call it, at least). WELL DONE, DREAMERS! DON’T STOP LOOKING! 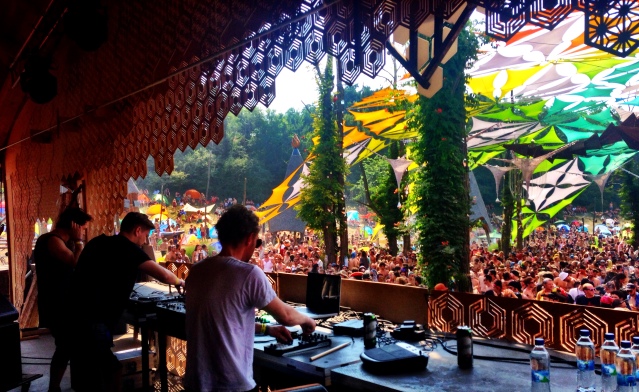 How to recognize a trancer, part #8: They travel A LOT. Okay, so what you see in this pic is a special breed of trancers: The ones actually playing the music. This is Ticon and Emok from Iboga, at the beginning of their set on the mainfloor.

I travel a lot, myself. This year, I’ve been to 11 different countries, including this Hungary visit, of course. But I can’t even begin to compete with these guys. Next week, Mexico. After that, Japan. On to Holland. Then Australia. And so on and so on. And everywhere, their view looks similar to this. Trance life.

How to recognize a trancer, part #9: They’re super duper connected to Earth. Yes, this ties in well with the offline thing, too, of course. (Mobile phones don’t survive well, either, in this playful environment of water and mud.)

Some are more connected to earth than others.

I’m not much of a mud person myself, but I did reach a certain level of the Connect with Earth thing: I didn’t wear any kind of footwear for the entire week. 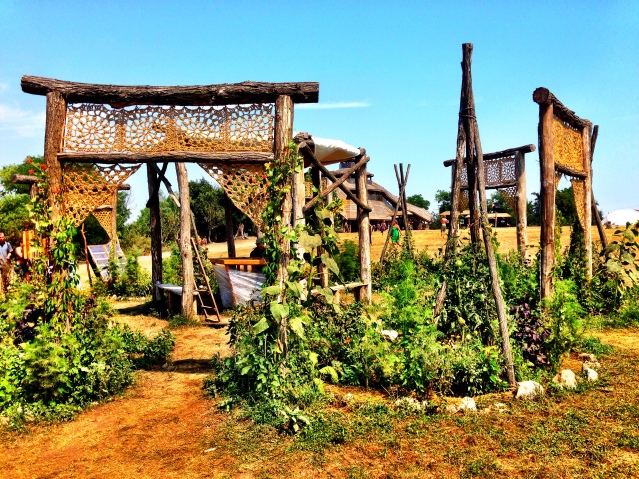 How to recognize a trancer, part 10: ECO! This Connected With Earth thing obviously means that trancers were organically minded loooong before that became comme il faut. This is one of the gardens of Ozora where you can grow your own food during the festival – and expand your mind with lectures on herbs and biodynamic gardening as well, of course. 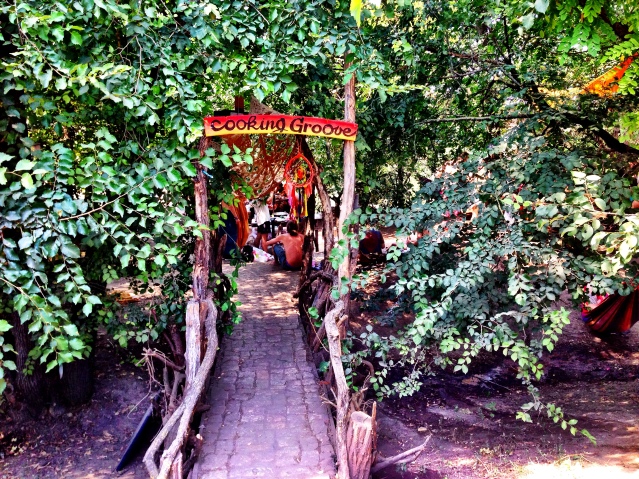 When you’re super duper connected to earth and the entire cosmos, biodynamic vegetables are not even enough. In the Cooking Grove of Ozora, food is made daily according to the chakras of the human body. Wednesday, for instance, is dedicated to the sexual chakra, which means all the foods are orange on that day. Gotta love it.

And with those words, you’re all set. Now you know how to recognize a trancer. Inside yourself too, of course. 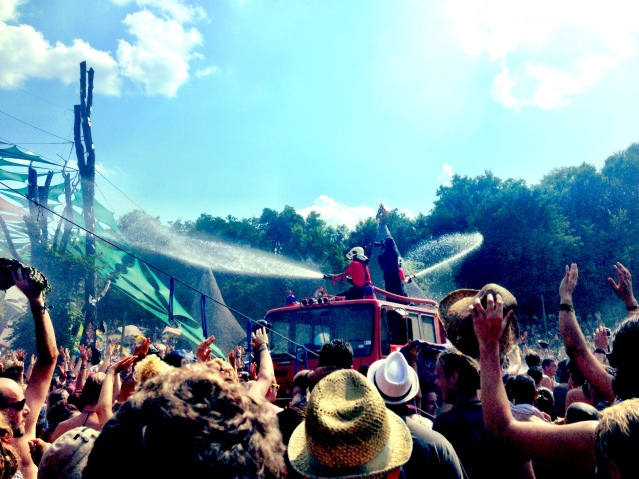 Do you want more on all that stuff junglists and trancers have in common? Jump straight to the 7 best things about being a raver or the 5 problems only ravers know about.

For more on the Mutual Respect Between Species with a Preference for Total Abandon on the dance floor, go to Blasts from the Past: Garden Party People.

Did you miss a day of JUngLE? Go here for the complete collection of #JUngLEkalenderen, both past and present.

That’s it, junglists, the darkest days are over. The sun is coming back.

← 5 problems only ravers know about
Blasts from the Past: The Dressed Up Junglists →

Extremely cute kitten uses Powerful Cuteness Magic Spell lvl IV to gain access to my lunch. Swipe for Resting and Planning Pose.
Janek og trappebåden.
Storm og havet.
Travel update: Everything was going well until we realized that we have ended up in Squid Game. 🤖
Jaaaaaaa. Endelig, endelig, endelig, endelig, endelig, endelig, endelig, endelig, endelig, endelig. Bare op over skyerne og ud i morgengryet!
Turn off the distraction machines.
Den Sorte Skole og Vertigo i Vor Frue Kirke. Jeg elsker bare laserlys. I vifter og buketter og multidimensionelle net. Der kunne med fordel være flere lasershows i kirker generelt - stemningen bliver helt automatisk ophøjet. Nutidens scifi-glasmosaikker.
Elsker oktobersommer. Og er helt ekstremt taknemmelig for den her hængekøje. 🌍
Lots and lots of hours of work here and sooooo close to completion now. My guess is two or three hours of work to go, and then, WipEout is DONE. 💥🌀 This has been such a puzzle, with lots of moving parts and 51.427 tiny decisions to make, but a fun one for sure! Especially when the entire thing started to look like what I had imagined. …just, like, EMERGING from the (previously) white canvas like a 4D landscape. The magic of that moment is the most magnificent buzz. ⚡️