The sportiest e-sport of all

I attended the Danish Championships in FIFA last weekend, where August Rosenmeier – World Champion 2014 and now Danish Champion for the fourth time – looked like this when he won the final. 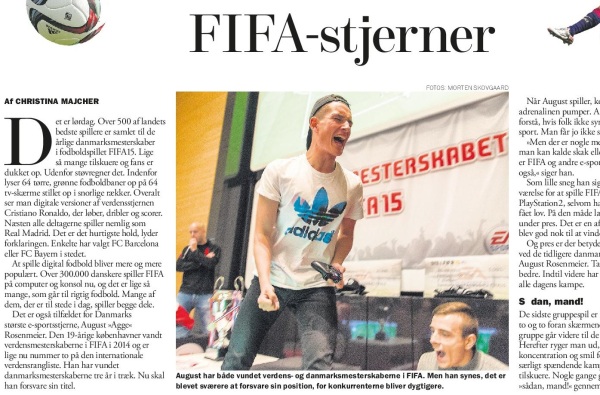 The two page feature can be read in Weekendavisen, out today and in the shops for a week.

The sporty vibe
This gaming event was mainly different from other gaming events I have attended in the last handful of years on three counts:

1) It had a very sporty vibe. [see 3])
2) The male-female ratio was about 100-1. I have been to gaming events with a similar kind of ratio before, but that’s many years ago. Out of the 512 combatants signed up for the matches, there were 0 (zero) females. [see 3])
3) Almost every single FIFA-player I spoke to on the day played football in real life, too. Which explains 1) and 2) and makes digital football* the most sporty e-sport of all.