It can’t all be about pretty dresses here. In fact, it can’t all be pretty. So let’s have a straight look into the contorted face of physical reality. Quite a fun place, when you know the moves and learn the rules. And then break them, to see what happens.

No vanity. Weird Faces coming up. Also, and I don’t want to reveal too much, but still: In the course of the next three days things will slowly heat up here in a jungliciously heartwarming way, so it’s time to have a giggle before we get all emotional.

And here’s another reason: It’s important to laugh today. It’s the shortest day of the year, and that kind of Scandinavian darkness is no joke. 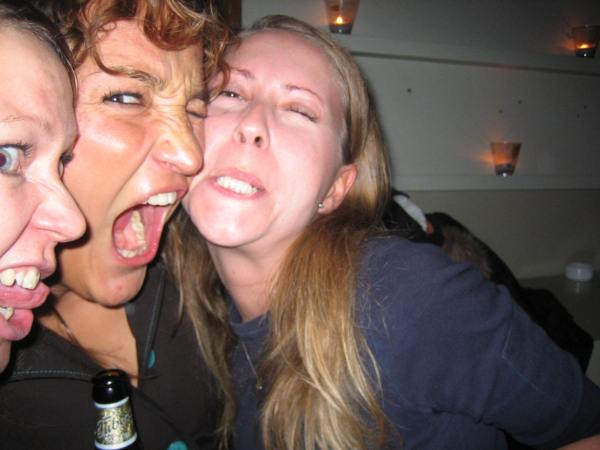 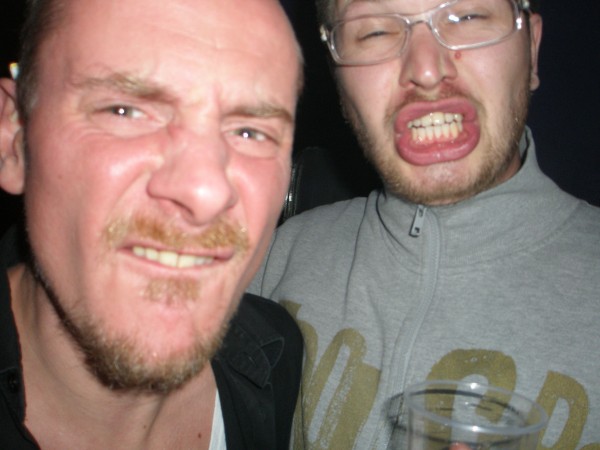 Bass faces feeling the bass. We are on the Ohoi! trip to London here, May 2007. Ohoi! played at Rhythm Factory alongside F.U.K.T. – and Simon Bassline Smith. (I prefer things to be very positive here, but just one small remark: I made a small note about Simon Bassline Smith’s set that night for my musical journals afterwards, and all it says is: “Cheese!”. Does anyone remember the set?)

I took two photos of Dj Hype with my mobile phone at the 2008 party at Stengade. JKamata managed to photobomb both exquisitely. Bonus info: Did you know that “photobombing” was just named Word of the Year by Collins English Dictionary? And what did we get in Denmark? Here it comes, Danish word of the year from Dansk Sprognævn and Sproglaboratoriet on P1: “Mobilepay”. “MOBILEPAY”!

The enthusiastic “I don’t care about your conversations and your networking, I want to parteeeeeyyyy”-face. 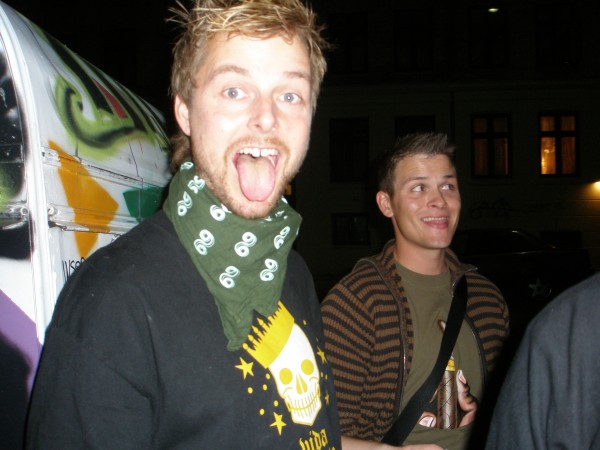 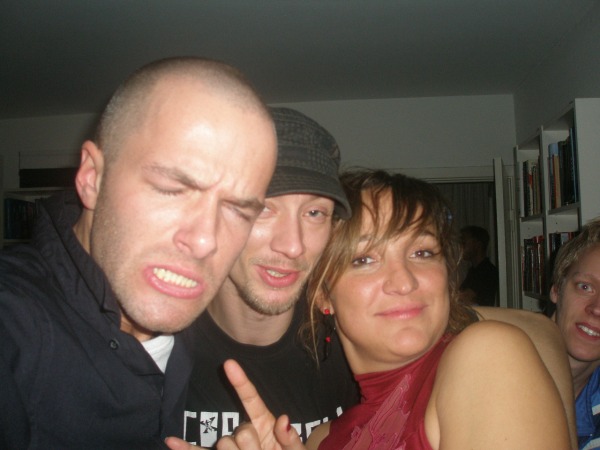 Evil Economist feels troubled about the state of the world at Jungle Bells 2007.

I am not sure it can get any weirder than this. Drop, you win!

The Time Traveller and the Amazing Shapeshifter try, though. They try hard. The epic Dyssen party, July 2008.

Slightly odd, yes, but this was a very Ohoi! kind of New Year’s Eve, so… PIRATE GEAR, obviously. PIRATE GEAR INTERMEZZO: If you want to re-read my text about the Kraken Monster, I managed to recover it in its entirety from the depths of broken links on half-abandoned websites: It’s right here (in Danish): Gigantisk dybhavsuhyre indtager Stengade

A classic taking-the-lift pic snapped on our way to DNBZone in June, 2008. 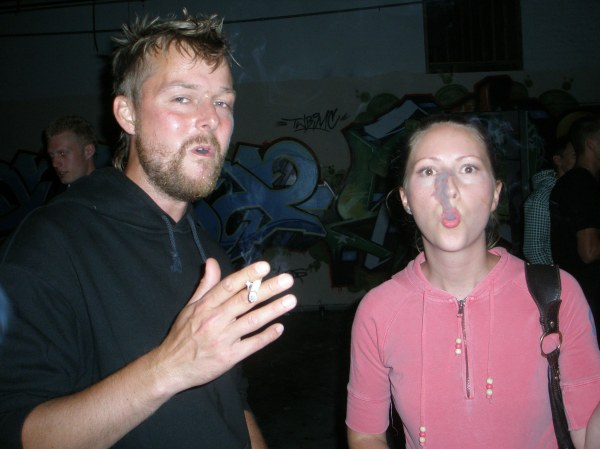 Whenever Mariii opened her mouth in 2008, a tiny bit of smoke from the Angry Flames of Jungle Monster Hell slipped out. 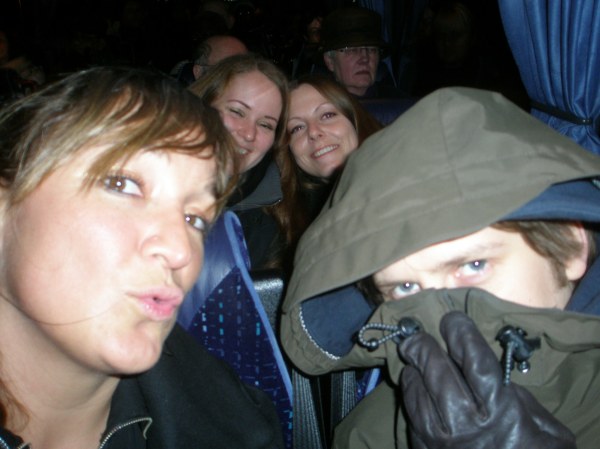 Junglists on a mission. We are driving this bus to dj Hype in Malmö! Blending in perfectly.

Sofus the Amazing Shapeshifter has just discovered that Chriszka the Time Traveller has magically reappeared through a portal at the Dyssen Party in Copenhagen after travelling the world for a while and having tons of colourful adventures. Sofus is very excited about this and wants to tell everyone! But Chriszka the Time Traveller is safe. The guy is a model, no-one believes all his wild stories.

Well done, JSL! Sulu just does the Zen Face, because nothing can touch you when you are protected by the glittery powers of the amazing Are You Dumb? t-shirt. 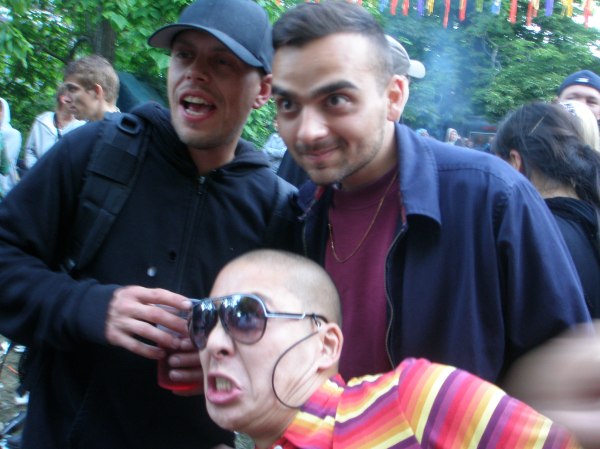 JKamata, the photo bombing ninja lightens up one of those boring mornings at Dyssen. 2008!

The Time Traveller ponders her next move (or jump), sipping a brain-cooling drink at Roskilde Festival 2008, while the Jungle Monster hides in a forest of glittery distractions.

And OBVIOUSLY, this series has to end the way it began, with another Group Hug meets Weird Face masterpiece, just to emphasize the grand illusion of chronological time (if that JUngLEkalender theme has escaped anybody’s attention by now). So. When is this? 2005? Recent? Now? Soon? You will never know, and the secret is CERTAINLY safe with The Time Traveller, The Jungle Hut Mama and The Jungle Monster!

Feeling a little bit warmer now? More expressive body language can be found in How to be a Junglist: The Dancefloor Moves.

For more Jungle Feelings, revisit the Group Hug Special where the Jungle Monster reveals itself for the first time. And for those who just can’t get enough of those monsters, this is where you test yourself for darkside junglism: The DIY Test: Is My Child a Junglist?

Do not forget the Lottery of Favourite Jungle Tunes from yesterday, people! Join the competition right here in Blasts from the Past: Jungle Bells 2006 if you want the chance to bounce your way into the dj Friction party at Pumpehuset for free – with a time travelling friend. Sharing your favourite tracks is SUCH a mood boost! And you need it, Scandinavians, with 7 minutes of daylight a day.

Extra bonus for the Copenhageners: If anyone is hit by massive waves of nostalgia with all these Jungle Bells at the Jungle Hut Blasts from the Past and wants to do some time travelling FOR REAL, keep an eye on things happening on facebook. Warm and cosy plans are brewing in the Jungle Hut!

Did you miss a day of JUngLE? Travel back through the entire JUngLE Calendar here.

← Blasts from the Past: Jungle Bells 2006
How to be a Junglist: The Hand Signs Special Part II →

The painting I'm currently working on - growing! The canvas is big, so it takes up quite a lot of space for me, also literally in the room - and I have never worked on a painting that required me to make this many sketches.
Hvordan man overlever januar: At stirre længe på blomster.
The cat in the box.
Nytår. 💥
Så når jeg ikke mere i år! 💥 Her er mit nyeste maleri og mit arbejdsbord, som kommer til at stå og vente præcis sådan her, indtil jeg samler penslerne op i 2023.
Situationen.
Final day of the 24 day JUngLEcalendar countdown. Glædelig jul!
Who has the MOST fun with machines: Gamers or ravers?
JUngLEkalenderen låge 18!