How to Be a Junglist: The T-shirt Special

With all this body language sharpened by many years of obeying thousands of thunderous demands of the bass, we don’t really need to put print on our clothes to express ourselves, now do we? But here we go and do it anyway, just for junglistic emphasis.

Let’s have a look at the printed t-shirts. 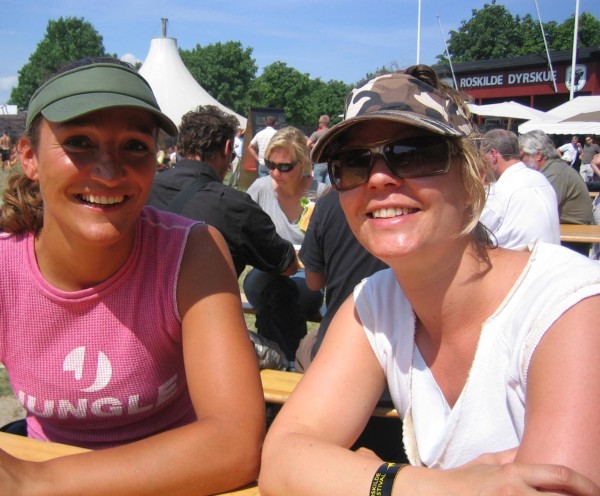 My most favourite JUNGLE top! Oh, what joy, when I found an entire shop in London called JUNGLE. Pretty easy to find some perfect junglistic prints in there, as you can imagine. I had an orange one as well, but it seems to have escaped every single photo ever taken. How weird is that. But then again, weirder things have happened in JUngLEkalenderen. This is Roskilde, the most excellent sunny year of 2005 where Ohoi! was playing. 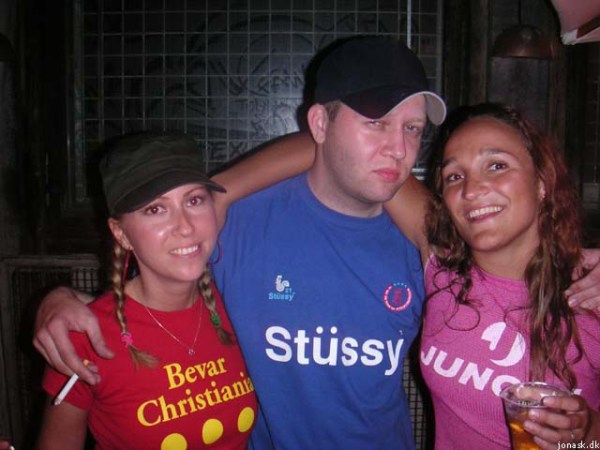 The JUNGLE t-shirt goes out to meet other t-shirts! Much joy. Tim Driver pretends he feels, you know, whatever, man. Photo courtesy of jonask! 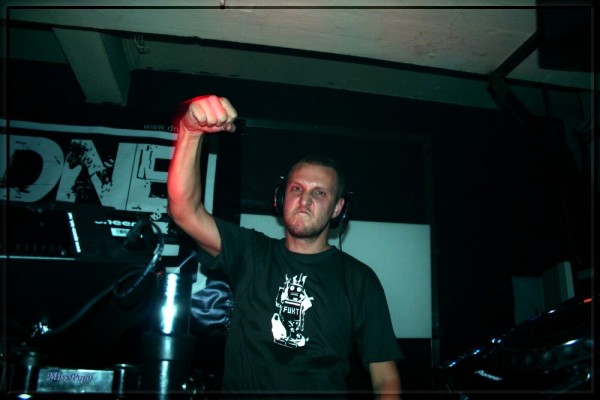 F.U.K.T. bass player Lars behind the decks, appropriately wearing a F.U.K.T. t-shirt in case someone gets their brain whacked out of their skull by all that bass and forgets who he is. This is the Infiltrata party, DNBZone at Culture Box, in 2006. 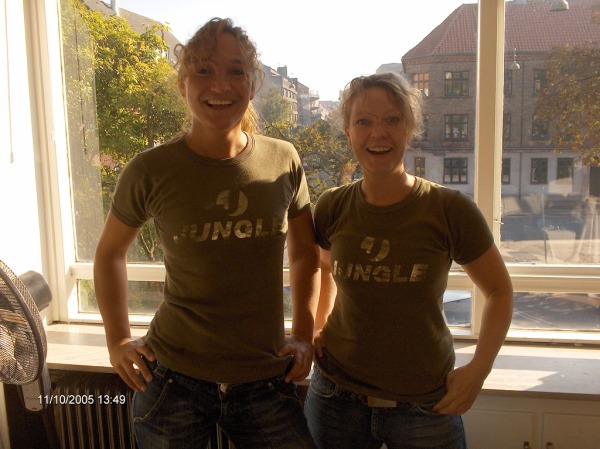 Look at thiiiiiis! So, I was moving flats, and we are wearing matching JUNGLE t-shirts to rise to the challenge of the hard work ahead. *singing* That’s what friends are foooooooor. 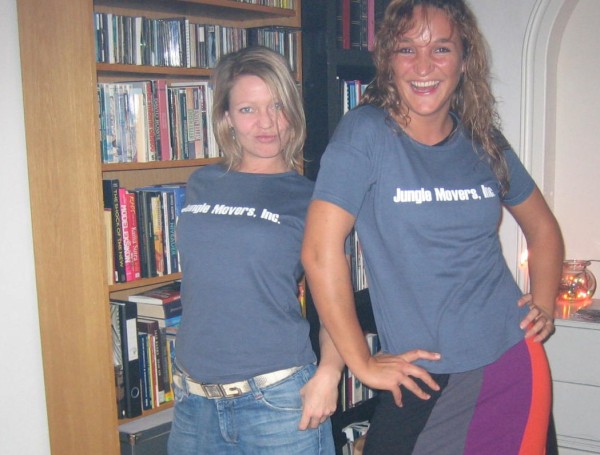 And here we go again. Some months later I was getting ready for the second move, and Svingsen made these t-shirts for the occasion. ❤ Jungle Movers Inc.! Whohoooo. Friiiiiiiieeeends. 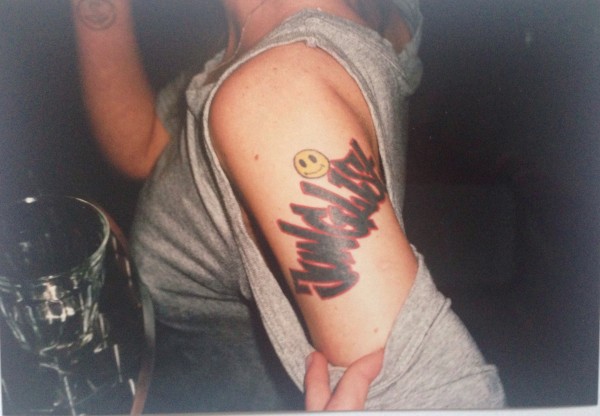 Some people get a t-shirt, other crazeeeees get the darn thing BURNT INTO THEIR SKIN FOREVER! “The Jungle Monster voice in my head told me to do it”-styleeeeee. 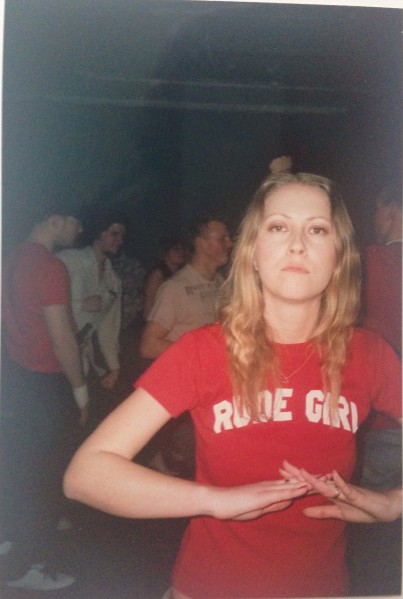 Not one single toss is given in this pic. 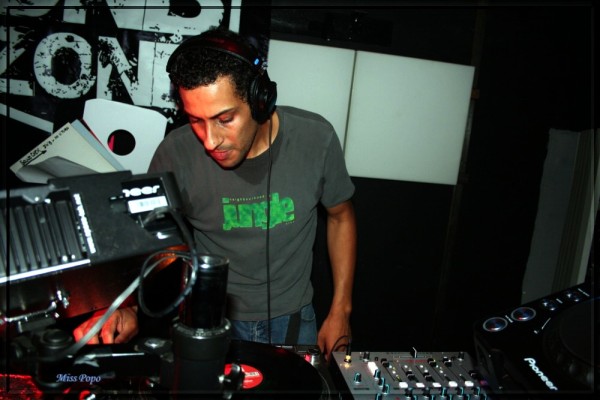 Basic and to the point! Nico DeFrost at the Infiltrata party, August 2006. Pic by Miss Popo. 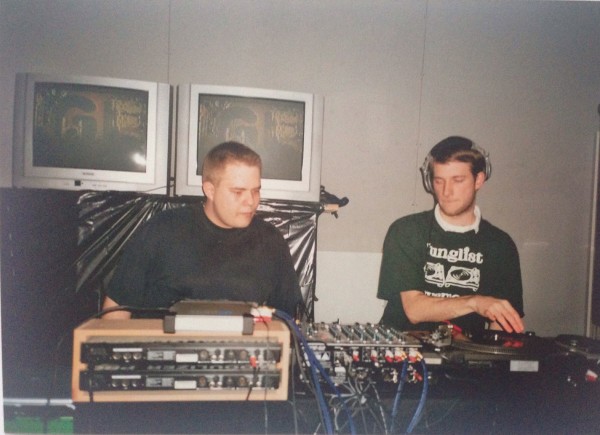 A BIG classic sported by the one like Vitus here! (Jeeeez, where IS this? Is this really how the basement in Culture Box looked back in the day? A blitz sure kills everything dead). 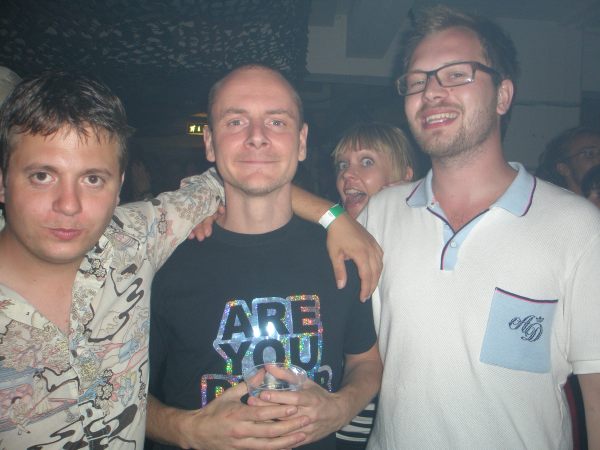 This t-shirt! Most awesome, worn bu Sulu! A deliberate provocation all wrapped up in glitter! Much like the man himself. This is RAW (and it says DUMB). 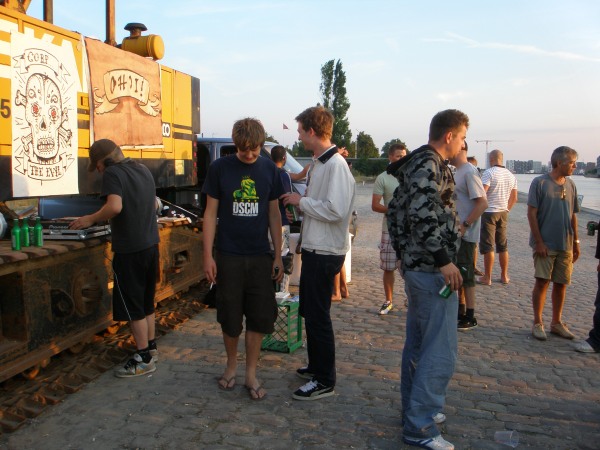 The one like Kristobal sporting a t-shirt from Dansk Sound Clash Mesterskab 2005. Lion an’ everythin’. Pretty junglistic. 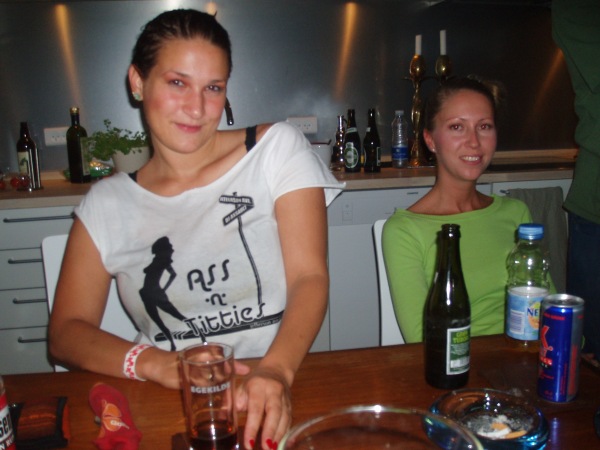 This t-shirt needs some attitude, Laura! On our way to the very hot DNBZone party with Infiltrata. 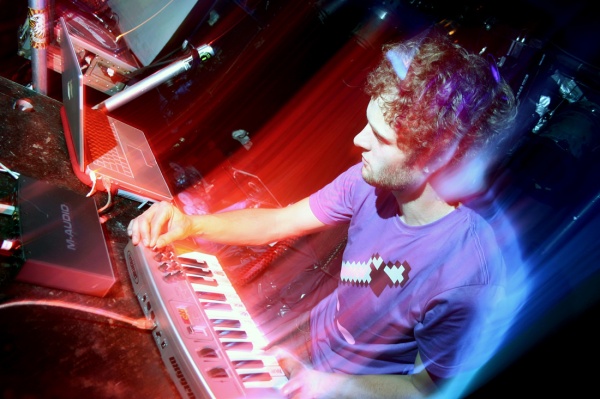 Is that a pixelated chainsaw on Soulmatic’s t-shirt? 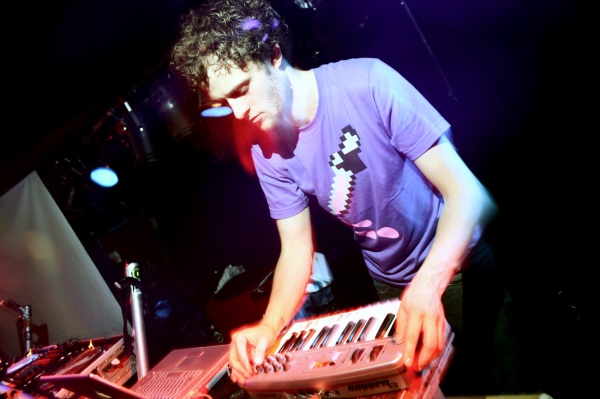 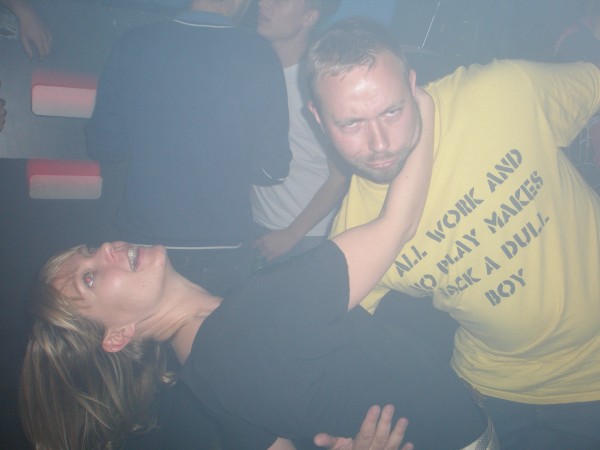 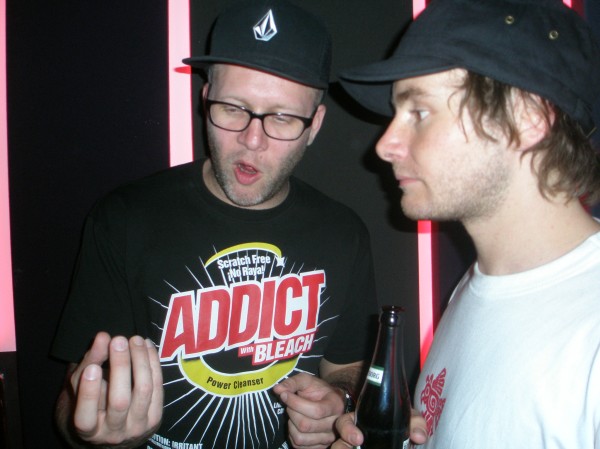 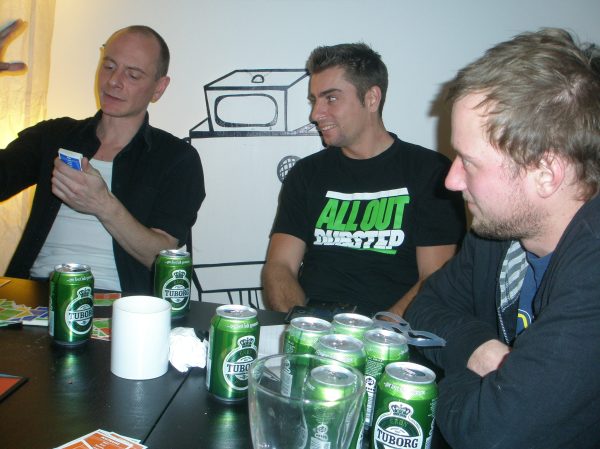 Ssssshh, don’t mention dubstep here. But I am just breaking my own rules and throwing this t-shirt in the mix anyways. We’re warming up to the Caspa party, November 2009. These guys REALLY know how to play Taboo! 😀 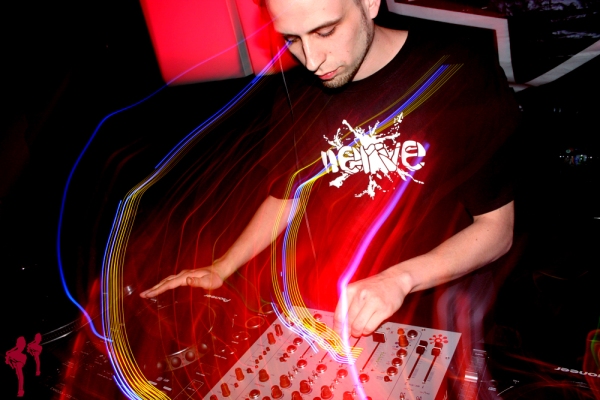 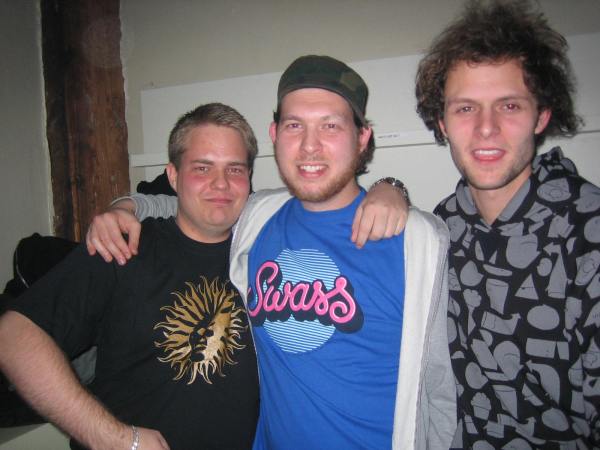 Is that a Sir Mix-A-Lot thing going on there? Never mind, here’s a fine collection of oldskool junglists at Nadsat, enduring the blitz. 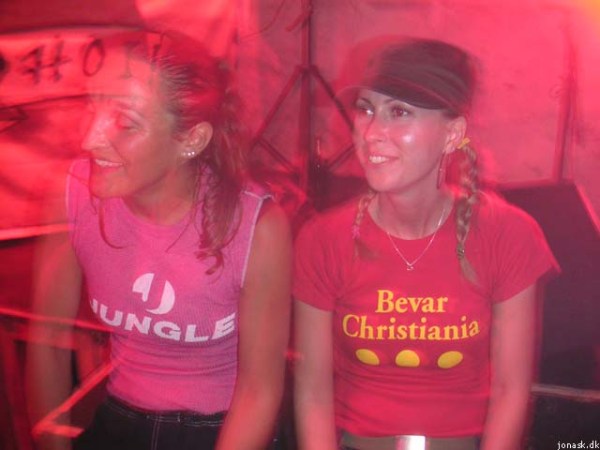 And here they are, Chriszka and Mariii on their most excellent and sweaty oldskool London adventures, having a SHORT break before throwing themselves out onto the dancefloor once again. NO WAIT! This is 10 years earlier! June 2004 – the Ohoi! party at Basement. See how nothing changes.

For more body language, revisit How to be a Junglist: The Dancefloor Moves.

For the trip to London: How to be a Junglist: Going to London

Do you remember where you saw the Jungle Movers Inc. t-shirt the first time? YES! It was in Jungle Feelings: The Group Hug Speciaaaaaaaaal!

Did you miss a day of JUngLE? Find the entire calendar here: JUngLEkalenderen.

← Blasts from the Past: Jungle Bells 2005
The Secret Junglists →

3 Comments on “How to Be a Junglist: The T-shirt Special”

The painting I'm currently working on - growing! The canvas is big, so it takes up quite a lot of space for me, also literally in the room - and I have never worked on a painting that required me to make this many sketches.
Hvordan man overlever januar: At stirre længe på blomster.
The cat in the box.
Nytår. 💥
Så når jeg ikke mere i år! 💥 Her er mit nyeste maleri og mit arbejdsbord, som kommer til at stå og vente præcis sådan her, indtil jeg samler penslerne op i 2023.
Situationen.
Final day of the 24 day JUngLEcalendar countdown. Glædelig jul!
Who has the MOST fun with machines: Gamers or ravers?
JUngLEkalenderen låge 18!