The DIY Test: Is Your Child a Junglist? 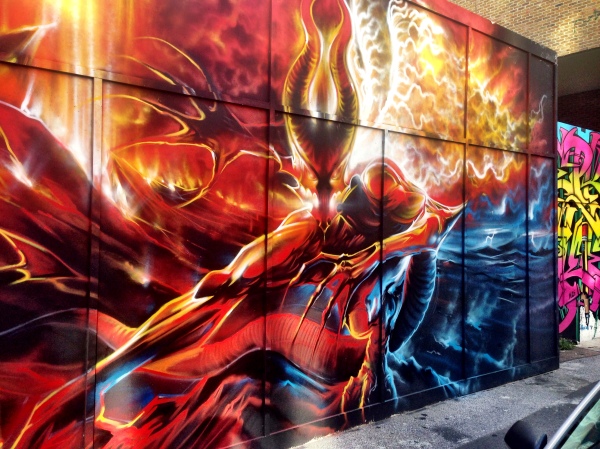 I like bright and happy things. But when it comes to jungle, I am drawn to the dark sounds, like a hypnotized Duracell rabbit. Today it’s time to explore the darkside tunes. I have made a list of 8 essential ones here. But first: Why do I like them so much?

Reason number 1
First of all, darkside was big when I started listening to jungle in London in 1993 and onwards. This was my first real meeting with electronic music and raves, and the sound was dark back then, so it was sort of the foundation. First love and all that.

Reason number 2
Secondly, I don’t like music that tries to be ingratiating and charming. Like “sexy” r’n’b, for instance, which, to me, is the opposite of sexy. Makes me cringe. With music, and especially with electronic music, I prefer tunes that sound like they don’t give a damn about me being there or not. Like they are force of nature, doing their own thing, allowing me in.

Reason number 3
But here’s the most important (or at least the most interesting) reason: It has always been like this.

Baby steps into darkside territories
When I was about one and a half years old I found my first favourite album. It was a 70s recording of Ali Baba and the 40 Thieves from my parent’s record collection, and it was pure horror. I couldn’t pronounce my own name properly at the time, yet. But I could crawl really fast, and I could locate the record player, and I could say “hear” and I could say “Ali Baba”. And so, I was able to insist on hearing that favourite album. Again and again and again.

The Do It Yourself Test: Is My Child a Darkside Junglist?
So here comes the test, parents. Here is the album (it’s in Danish. SUPER fun 70s style!):

If you don’t recall the Ali Baba story from the 1001 Nights, there are two terrifying main events: A man being cut into 4 pieces – and then sown back together by a shoemaker. And then 40 thieves being boiled alive.

I still remember the song of the shoemaker. And the rhythmic sound of the thieves getting killed one bye one by boiling petroleum, stuck in their barrels.

Yup, that was my favourite album at one and a half. Darkside! Early on, apparently. It’s probably safe to say that I didn’t totally understand all the goings-on, but the weird rhythms and sounds mixed with a sinister vibe clearly hypnotized me.

So play this to your kids, parents. You will find the shoemaker sowing dead Kassim back together at 16.47.  And Morgiana pouring boiling hot oil over the 40 thieves at 26.10.

If your kid likes it, you have a darkside junglist on your hands. Congrats!

Darkside Jungle Classics
Oh, and jungle does this horror thing sooooo well. Let’s dive into some darkside masterpieces. And by darkside I mean: Not just jungle and drum’n’bass with ‘dark sounds’ because then this list would be like 20.000 youtube-links long. Real oldskool darkside – with horror samples, monstrous laughs, dread, crying, panic.

There are SO many remixes of this tune. This is my absolute favourite. Again, all the ingredients are in place. Panicky voices. Crying. Voices somehow too close and too far away, like in nightmares. Hectic and awesome drums. Screaming. Chilling synths.

This tune is so completely over the top. Guns loading. Glass breaking. And what is more chilling than somebody saying “Nobody is gonna hurt you” followed by a scream indicating that somebody clearly did anyway? Nothing!


I know this is already featured on my 7 favourite jungle tracks of all time list, but no darkside collection can be complete without this mega-classic! For some variation, you can enjoy a bad boy gunshot version of the track here. <– Lots of playing around with the crying and shouting here. Those were the remix days…

Same thing goes for this classic. No darkside collection without Predator! This track turned me into such a sample hunter. For years I couldn’t watch movies without thinking about which sound bits and sentences could be cut out and used for new tracks.

There are so many versions of this track, too, but this remix is my favourite. The original has more direct horror samples: Boogie Times Tribe – The Dark Stranger – and the Origin Unknown Remix is good, too. But the Q-Bass remix is the best.

A wolf howling. Ice cold synths. Music built for adrenaline junkies. Escape, escape, escape, but stay on the dancefloor while you do it.

REALLY panicky shouting here, like from someone who is clearly already lost. And 1977 Star Wars samples. If you strike me down I shall become more powerful than you can possibly imagine. Uuuh yes.

Need some relief?
If you need a sonic cuddle after all this darkness, relax with my list of the 7 most romantic jungle tunes ever.

Did you miss a post in JUngLEkalenderen? Find all 12 entries right here.

Awesome samples – where did they go?
Is it just me, or were the selection of film samples and the creative use of the samples better in the 90s? It could be me stuck in the past here, but it seems like it, it really does. The creative use of samples fits better with the jungle soundscapes than the scraped down techsteppy drum’n’bass, sure. Like, there is more room… That could be one explanation. What do you think? If you can share some examples of new tracks with good soundbites from films etc. I would LOVE to hear them! Share in the comments.

← How to be a Junglist: The Hand Signs Special
Jungle Feelings: The Group Hug Special →

7 Comments on “The DIY Test: Is Your Child a Junglist?”